The joint project of the young researchers of ETU "LETI" and the University of Haifa entitled "Automated System for Analyzing Animal Behavior" was presented at the HEALTHINF-2019 conference on health informatics. 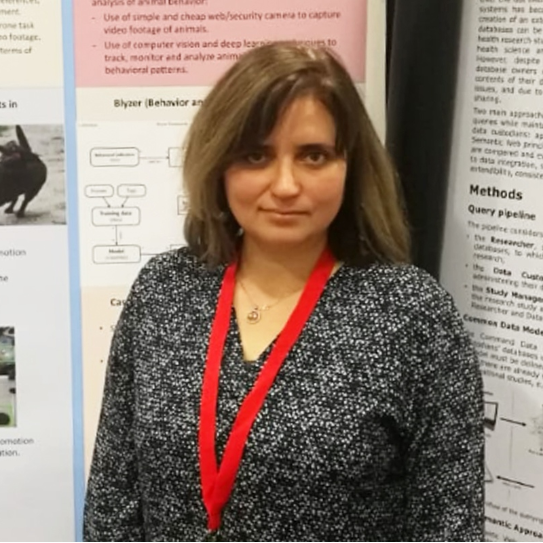 The HEALTHINF-2019 conference took place in Prague (Czech Republic) on February 22-24 as part of the BIOSTEC, 12th International Joint Conference on Biomedical Engineering Systems and Technologies. The aim of the conference was to unite researchers and practitioners interested in the application of information and communication technologies (ICT) in health care and medicine in general, as well as in supporting people with special needs.

The purpose of the conference is to bring together researchers and practitioners interested in the application of information and communication technologies (ICT) to healthcare and medicine in general and to the support of persons with special needs in particular.

Anna Zamanskaya, Senior Lecturer at the Information Systems Department at the University of Haifa, presented a computer-based automated behavior video analysis system for animals, analyzing sleep quality of dogs. The project was developed jointly with researchers from the Department of Automation and Control Processes of ETU. This development is part of an interdisciplinary project to automatically analyze the behavior of dogs based on video recordings from simple cameras.

“The system being developed is based on the integrated use of convolutional neural networks and classical data processing methods. The results obtained can significantly automate the analysis of the dogs' behavior. The structure of the data processing model is common and can be used in other computer vision tasks.”

Dmitry Kaplun, Associate Professor of the Department of Automation and Control Processes of ETU "LETI"

According to the developers, video analysis is one of the most important tools for ethology - the science that studies animal behavior. In particular, it is very useful for measuring the total animal time budget, which is one of the main indicators of animal well-being. In this case, there can be hundreds of hours of analyzed data, which is too much for manual processing.

“Automatic video analysis can seriously change the nature of work for animal researchers, both in terms of accuracy, the types and number of parameters that can be measured, and in terms of the amount of video data to be processed. Automatic video-based systems already exist for different types of animals: wild animals, farm animals, insects, and many others. In addition, well-developed commercial rodent tracking systems such as Ethovision are widely used in behavioral research.”

Dmitry Kaplun, Associate Professor of the Department of Automation and Control Processes of ETU "LETI"

Although video analysis is widely used for dogs, only a few works are devoted to automatic video analysis of their behavior. To obtain these videos, specialized 3D Kinect cameras are used, which are difficult to install and operate, and the cameras themselves are quite expensive.

Researchers from ETU and the University of Haifa follow a different strategy, using video from simple and accessible surveillance cameras. Currently, there is a solution to the problem of automatically quantifying the sleep cycle of dogs in rooms or in open-air cages, where a simple security camera is installed. It records all day using night vision at night. The proposed technology makes the process of monitoring dogs’ condition and behavior easier and more affordable, as well as more effective.

The development has aroused great interest from researchers from different countries participating at the HEALTHINF-2019 conference. The Clever Dog Lab research laboratory at the University of Veterinary Medicine, Vienna, and colleagues from Portugal are among them.

The BIOSTEC conference is organized by the scientific non-profit association Institute for Systems and Technologies of Information, Control and Communication (INSTICC), whose main goals are to serve the international scientific community by promoting, developing and disseminating knowledge in the areas of information systems and technologies, control and communications.