A world-famous artist: ETU "LETI" painting robot recognized as the best project at the International Technical Fair in Bulgaria

A painting robot created by the developers of the ETU “LETI” Youth Research Institute received a gold medal as the best project at the 75th International Technical Fair in Plovdiv (Bulgaria). 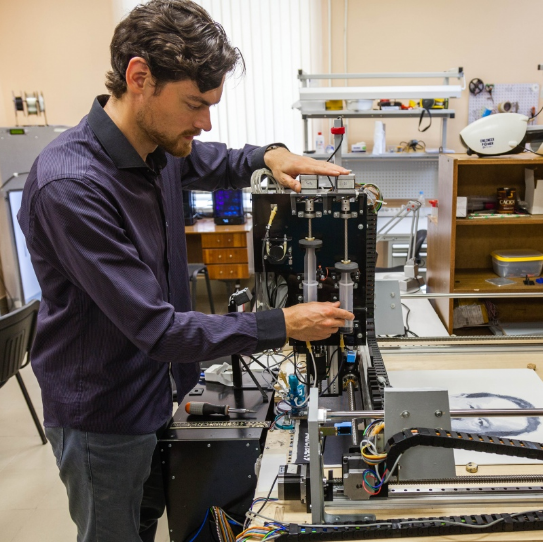 “The painting robot is one of the sensations of the 75th International Technical Fair according to the organizers of the exhibition,” local media write about the “iron painter” from St. Petersburg Electrotechnical University “LETI,” designed for artistic painting in shades of gray. The painting robot was presented at a competition as part of the 75th International Technical Fair in Plovdiv, dedicated to scientific and academic cooperation between Russia and Bulgaria.

The Russian exposition, organized by the Ministry of Science and Higher Education of the Russian Federation, presented more than one hundred innovative research projects and advanced technology from 50 Russian universities and research institutes in the field of robotics, microelectronics, mechanical engineering, information technology, artificial intelligence, research space, and much more.

On September 25, 2019, the organizers announced the results of the competition and awarded the ETU “LETI” representatives a gold medal and a diploma for the best project, which is part of the exposition of Russia, the partner country of the International Technical Fair.

The hardware and software of the painting robot were created by developers from the Youth Research Institute, headed by Artur Karimov, Associate Professor of the Department of Computer Aided Design of ETU "LETI." Today, the painting robot allows one to create acrylic paintings on canvas in gray tones by applying five basic colors and their mixtures in arbitrary proportions with a single brush.

The developers managed to overcome the basic restrictions in the tone rendition, previously considered one of the unresolved problems of modern robot artists. For this, the developers used a new device for mixing paint. The robot is equipped with a brush and a paint mixer. Paint is supplied by syringe pumps. The maximum canvas size is 50 x 70 cm. The developed program for splitting the image into brushstrokes allows converting the original image into a machine code based on the gradient painterly rendering algorithm. Today, there is no description of systems with a similar mixer-brush in the scientific literature, so the developers believe that their robot is the first with such a device.

"We proved that our approach for on-the-flow paint mixing is fruitful and advanced. Today, our machine successfully paints grayscale images with apparent aesthetics automatically, without any human assistance. Next, we will improve our robot to implement color painting. We also plan to design a new version of the machine suitable for commercial purposes."

The developers plan to make a painting robot able to pass the artistic version of the Turing test soon: his paintings will be indistinguishable from works drawn by people.

According to researchers, robotic painting can later become one of the driving forces in the art and entertainment industry used by artists, printers, shops, museums, and galleries to create high-quality copies of artworks. Painting robots will allow realizing precise robotic technologies of restoration and conformal deposition of protective coatings.

It is planned that the unique development of ETU "LETI" researchers will become the starting point for achieving the ultimate goal - the creation of a modern restoration research center Intellectual Restoration Laboratory in St. Petersburg. Its main task will be to carry out work on the restoration, documentation, non-destructive control and monitoring of the state of historical and cultural monuments using the latest laser, optical-electronic and additive technologies developed at ETU "LETI." The creation of the Intellectual Restoration Laboratory will increase the quality of the restoration works carried out in St. Petersburg, which will help to solve actual issues of preserving monuments exhibited outdoors and exposed to destructive environmental factors.