ETU "LETI" researchers presented their experience in the restoration of cultural and historical monuments using laser and optoelectronic technologies at Berlin Science Week. 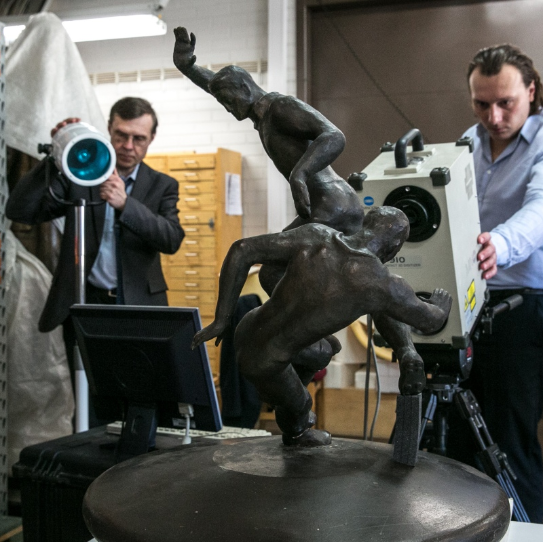 “Restoration can be considered as a “healing,” Dmitry Likhachev, outstanding Russian cultural scientist and academician, said. Today, this statement guides heritage science. How to choose the right method of “treatment” so that in the process you do not harm a sculpture, monument, or canvas? Art workers want to know the answer to this question. ETU "LETI" researchers have proposed unique methods of restoration, documentation, and creation of copies of sculptural monuments using laser technology.

The experience of St. Petersburg researchers on the use of laser technology has attracted the attention of foreign colleagues at Berlin Science Week, one of the most prestigious European scientific events. A panel session devoted to the restoration of cultural monuments using high technology took place at the event. Vadim Parfenov, Professor of the Department of Photonics at ETU “LETI,” was one of the key speakers. He presented the international scientific community with an overview of the practice in preserving historical and cultural monuments in St. Petersburg using laser technologies, which were carried out by the university research team in cooperation with specialists from museums and restoration companies from 2006 to 2018.

“In recent decades, the problem of the monuments' destruction under the influence of the environment has become much more acute due to ecological factors. To the greatest extent, it affects large industrial megacities around the world, including St. Petersburg. Therefore, the issue of developing new highly effective methods and technologies for the restoration and documentation of monuments has long been on the agenda.”

At Berlin Science Week, Vadim Parfyonov talked about the first practical experiments of university scientists on the use of lasers in restoration. In 2006, researchers carried out the project to clean marble tombstones in the 18th-century necropolis of the Alexander Nevsky Lavra in cooperation with the Heritage Restoration Workshop company. In 2007, the university research team collaborated with the State Russian Museum to clean 30 Italian 18th-century marble sculptures in the Summer Garden in St. Petersburg. It was possible to remove all contaminants without damaging the stone surface using a laser.

The participants in the panel session in Berlin showed interest in the experience of restoration by university researchers at the Tsarskoe Selo State Museum and Heritage Site. For the first time in international practice, the entire cleaning of marble statues was performed exclusively with a laser. Together with restorers from the Resstroy company, ETU "LETI" specialists were able to restored the sculpture Zephyr Swinging on a Branch created in 1860. Before the project, it had old biological lesions, black gypsum crusts, and numerous soot and dust contaminants. The results proved the laser as a tool for restoration to be effective.

“ETU "LETI" is the only research center in our country that is constantly exploring the potential of using laser technology and its use in museum work and developing new methods and technologies.”

Yet another area of ​​work of ETU "LETI" researchers, the use of 3D laser scanning technology to create electronic passports and physical copies of sculptural monuments, aroused the interest of foreign colleagues. There is a heated debate among museum specialists in the international community whether it is better to let the collapsing exterior monument die in its historical place or replace it with a copy? Foreign experts have so far failed to come to a consensus. The statement by the ETU "LETI" researchers that such a dilemma no longer exists in St. Petersburg with its harsh climate surprised the participants in the panel session in Berlin.

“Today, in our city, there is an intensive process of making copies of sculptural monuments with subsequent conservation of originals in museums. But another serious question arises: what technologies can and should be used when creating copies of monuments? Now, copies are made by molding the original sculpture which inevitably leads to a significant physical and chemical effect on its surface,” Vadim Parfyonov explained.

ETU "LETI" researchers offer an alternative way, which is contactless copying of monuments. It allows one to make copies of sculptures from natural stone (marble, limestone, granite, etc.). University researchers also have experience using this technology. A copy of the marble bust Primavera from the Tsarskoye Selo collection was made using 3D laser scanning. The research team carried out another similar project for the marble bust of the Russian Emperor Peter the Great from the Peterhof Museum collection.

With help of 3D laser scanning, computer modeling, and 3D printing, ETU "LETI" researchers also managed to produce a replica of the lost sculpture from the park Sergievka in the suburbs of St. Petersburg.

"The results of projects to create copies of the marble busts of Peter the Great and Primavera are convincing evidence of the high efficiency of the non-contact method for creating physical copies of sculptural monuments made of stone."

According to the researcher, despite the positive results of the work, the introduction of innovative technologies in museum work is slow. The main reasons are the financial costs and a wary attitude to new methods, because the main commandment of the museum employee is like that of a doctor, “Do no harm.” All this is holding back the introduction of new restoration methods, which could increase the efficiency of museum work.

ETU "LETI" researchers hope that their unique results presented at Berlin Science Week will arouse practical interest and open prospects for the wider introduction of laser and optoelectronic methods and technologies in museum work in Russia.