Alla Levina, Senior Researcher at ETU "LETI," spoke about the risks that smart devices pose, their weak spots, and threats of attack from third-party channels at the international inter-university conference "Ecosystem of the Digital Economy" in Berlin. 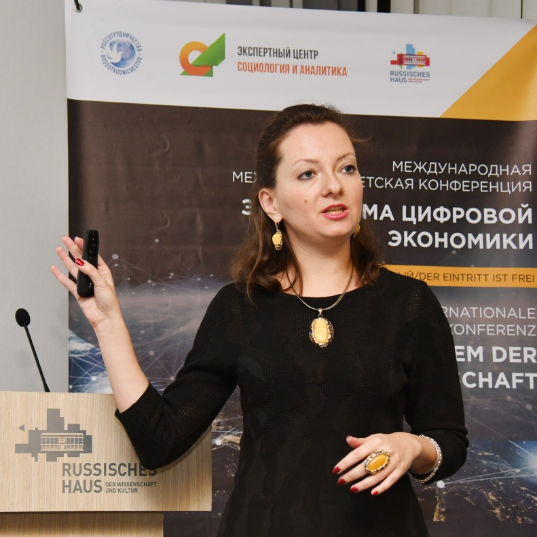 From December 2 to 3, 2019, the international inter-university conference “Ecosystem of the Digital Economy” took place at the Russian House of Science and Culture in Berlin (Germany) with the support of Rossotrudnichestvo. The program included plenary sessions, round tables, speeches, discussions, and a demonstration of projects.

At the conference, leading experts and representatives of German and Russian universities and companies spoke about cybersecurity, venture capital, the vulnerability of modern smart systems, and blockchain technology. Alla Levina, Senior Researcher at the Department of Automation and Control Processes of ETU “LETI,” made a presentation on the risks that smart devices pose, their weak spots and threats of attack through third-party channels. As an example, she showed a comic clip by Sberbank about Mr. Kettle. The kitchen appliance became so smart that it managed to collude with the rest of the appliances in the house, hire guards, and drive its owner out of the apartment.

“This example, of course, is a joke, but it is a vivid indicator that mobile smart devices can be hacked and gain full access to personal data. For example, through a pet collar connected to a mobile phone, hackers can learn not only everything about the pet’s movements but also about its owner. Each key of the computer keyboard has its sound, and with a good microphone you can find out what exactly a person types. So far, one of the most effective types of protection against attacks through third-party channels is error correction codes."

Alla Levina, Senior Researcher at the Department of Automation and Control Processes of ETU “LETI”

The topic of IoT security is very relevant today. Since 2017, the Department of Automation and Control Processes of ETU “LETI” works on ways to protect the privacy of data for IoT devices. Specialists of the department have proposed an effective alternative to cryptographic algorithms for data encryption: data de-identification. Data de-identification is particularly effective when the recipient is focused on analyzing aggregated data, but not individual records. This technology can be a viable alternative to encryption/decryption, which protects data privacy while maintaining the ability for the recipient to analyze it. In 2017, a scientific group led by Dmitry Kaplun, Associate Professor of the Department of Automation and Control Processes, won a grant for the project “Energy-Efficient Data De-Identification Solutions for IoT devices in the Sensor Network” in a competition for fundamental research projects by the Russian Foundation for Basic Research in conjunction with the Ministry of Science and Technology of Taiwan.

Researchers note that not only IoT devices are susceptible to attacks through third-party channels. Now, there are developments in the field of analysis of weak spots to attacks via third-party channels of personal computers, smartphones, and many other objects that have data protection algorithms based on cryptographic transformations.

Developments of ETU "LETI" researchers include an analysis of the weak spots of trackers to attacks on third-party channels, in particular, trackers for dogs. The results were presented in several publications and at a conference in Berlin.

The conference series "Ecosystem of the Digital Economy", organized by Rossotrudnichestvo, is a discussion platform for teachers and researchers from leading Russian and foreign universities, experts in the field of digital technology development, representatives of state and private companies and NGOs.

The events are aimed at developing scientific, educational and economic relations with foreign partners, using international experience to develop the digital economy, including attracting high potential staff to the Russian economy.